This page constantly changes and I have given up all hope of maintaining it in chronological order. Here is the latest, very interesting, information from sisters, Cheryl Murray and Jeanette Murry.

They write "Our brother and uncle, who are direct male descendants of Kennedy Murray through Kennedy Murray's son James (NSW), and then his son Solomon, had their YDNA tested at 111 markers with Family Tree DNA a few months ago and it turns out that Kennedy Murray was actually a hidden MacGregor."

The MacGregor name was banned in Scotland for around 150 years (on and off) and Murray was a common alias.

Apparently the history stems from the Battle of Glen Fruin

Preceding the Clan Colquhoun's defeat at Glen Fruin, James VI of Scotland issued an edict in April 1603 that proclaimed the name of MacGregor as "altogidder abolisheed". This meant that anyone who bore the name must renounce it or suffer death.

In 1604, MacGregor and eleven of his chieftains were hanged at Mercat Cross, Edinburgh. As a result, the Clan Gregor was scattered, with many taking other names such as Murray or Grant. They were hunted like animals and flushed out of the heather by bloodhounds.

The MacGregor bloodline traces its origin to a Gregor who lived in the 14th century though some genealogies go back further, to King Alpin. King Alpin's descendants are said to have become the founders of not only Clan Gregor but, among others, the MacKinnons, MacQuarries, MacAulays and MacAlpines.

The history of the MacGregors is a turbulent one and as a result the name was banned (proscribed) from 1603 to 1775, although in practice the worst years were from 1603-1642. From 1660-1693 the ban was in fact lifted, but it was re-imposed on the accession of King William of Orange as 'punishment' for the MacGregors taking the wrong side.

This later ban had most effect in commercial terms since one could not use the MacGregor name on official documents. Many MacGregor families did not retake the clan name when it finally became legal to do so, and as a result, the Clan Gregor Society now recognises more septs and aliases than perhaps any other clan.

Cheryl and Jeanette hope that over time it will be possible to understand more of the clan's history from McGregor DNA project. Certainly there is no doubt that those who find that their DNA matches the bloodline will be able to claim a connection with the traditional genealogies, even if, for their particular family, the paper trail has dried up.

In the 18th century there were disputes over the chieftainship but eventually John Murray (later MacGregor) of Lanrick was recognised. The MacGregors of Glengyle disputed this but eventually, following a petition signed by 800 MacGregors, the Lord Lyon recognised him as chief in 1775.

Cheryl and Jeanette say their paper trail has dried up, but they are still looking. They now realise this is why they could never get past Kennedy's parents. 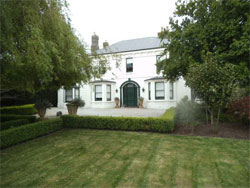 I began this page in chronological order however I thought these lovely photographs, above and below, taken of Fallgrove House by Gwen Shelton, should take precedence. Fallgrove House, in Tasmania, was built by Kennedy Murray, the son of convicts, Kennedy Murray and Anne White. It was originally called Prosperous House. Kennedy Murray junior (an Americanism which I detest but it is the only way to clarify who is who when fathers are idiotic enough to give their sons their own name), became the inaugural Chief Constable of Evandale in 1835, quite a turnaround when one considers both his parents were convicts. 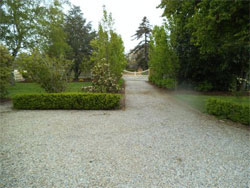 A Thief by Habit

Back to the past. I previously wrote that my great great great grandfather, Kennedy Murray, was born in 1764 in Dundonald, in Ayreshire, Scotland, however I have been corrected, regarding the date, several times and apparently he was born on 24 August 1771, although the place remains the same. According to yet another, recent, source he was born in 1764. His parents were John Murray and Elizabeth Calder Kennedy.

Kennedy Murray was considered a thief by habit by the magistrate who tried him in Glasgow on 24 September 1786. He had stolen an assortment of goods, which included a wooden box, a pair of 'knittings with buckles' and six knives, from a travelling salesman and for this he was sentenced to transportation for 14 years. Under normal circumstances he would have been placed in a Glasgow gaol - and if that had happened I would not have existed (nor would many many other people) - however the Scottish jails were full and he became one of the first 20 convicts from Scotland to be transported. 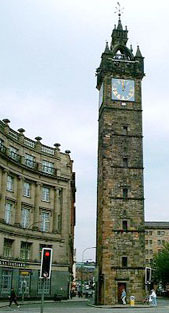 Cousin Jeanette said that when looking through Scotland's People records online the only Kennedy Murray (spelt Kennady) born in Scotland in that time period was in 1771 in Dundonald. This age also fits with his sentencing as they say they agreed to banishment because of his youth. This would mean he was 15 when he was sentenced and 21 when he was sent to Australia.

Kennedy Murray travelled as one of 404 convicts on board the Pitt which sailed with the Royal Admiral and the Kitty. His date of departure from Yarmouth was 17 July 1791 and he arrived in Sydney almost seven months later on 14 February 1792. He was one of the lucky convicts who were alive at the end of the voyage as 29 of them died.

Initially he was placed at the Toongabbie convict farm, however four years later, on 1 October 1796, he was transferred to Norfolk Island, another move which helped him to become one of my direct ancestors. On Norfolk, fellow convict Ann White had been deserted by John Scott and, upon Kennedy's arrival they began a relationship which produced two children, Kennedy (1799)(see photo below), and Elizabeth (1802-1878 - my great great grandmother). Within three months he had deserted Ann.

Kennedy Murray left Norfolk Island on 23 April 1802 to settle at Evan (later called Penrith) which was on the Nepean River outside Sydney. He was granted 30 acres at Evan on 25 November 1809 and he then married another former convict, Ann Parker, on 14 March 1814 at St Phillips, in Sydney. Ann Parker was only fifteen when she was transported to Australia on the HMS Glatton.. Prior to the marriage they had a son, John (1812) and a further three children were then born, William (1815), Henry (1816) and James (1819).

The year after James' birth, Kennedy Murray placed Ann in a lunatic asylum at Castle Hill and she was there until she died in 1868.

Cousin Colleen has sent additional information which shows poor Ann spent 48 years and three days in lunatic asylums and died in the Parramatta Lunatic Asylum. At some point, probably after Ann was placed in the asylum, the four boys became inmates of the Cabramatta Boys Orphanage. Henry, aged six, died there. It is not clear how long they remained there however by 1828 Kennedy was known to be living on three acres at Pittwater with John and a housekeeper, called, amazingly, Ann, with the surname of Haines. 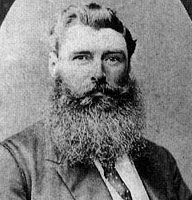 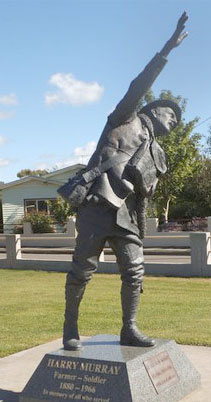 I am very guilty of judgemental behaviour. Ever since I put up my first website, in 2008, I have constantly resisted calls from numerous cousins, to put information about Henry William Murray, better known as Harry Murray, on my site. As a pacifist I consider war is abhorrent. I have now reconsidered, not my stand, but my shortsightedness in failing to give space to a member of the Murray family. 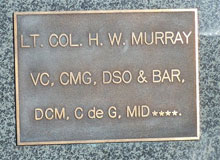 Harry was the son of Edward Kennedy Murray and Clarissa Littler. For those who wish to read about his life I suggest you visit Wikipedia which, I am told, has a great deal of information.

Back to my direct line

I mentioned Elizabeth Murray, daughter of First Fleet convicts, Kennedy Murray and Ann White, but I never continued with this part of my story.

Both Elizabeth and James were born during the first settlement of Norfolk Island and both died at Carngham in Victoria. They lived into their 70's and had sixteen children so it was amazing Elizabeth lived to 76 and wasn't worn out years before.

I am descended from their daughter, Caroline, who married James Hovey, and they had 13 children. They lived in the Creswick/Daylesford area in Victoria.

Isabella, their daughter, married Charles Mann and they lived at Lexton where their last child, Thomas Edwin, was born and became my father.

Many thanks to Gwen Shelton, to Ian McAinsh and to his son-in-law, to Colleen, and to Cheryl and Jeanette, for information and photographs which I have used on this page.

Links to other Convicts associated with my Family