Voyage of the First Fleet

Governor Arthur Phillip is to be applauded for taking his group of ships, convicts and sailors on a voyage half-way around the world however it was unfortunate preparations had been sketchy and supplies were inadequate. The majority of the convicts on board had spent months, even years, on prison hulks prior to the departure and they were an unhappy lot. Most of them would never see their families again and the officers and crew also faced a three year separation from their families. 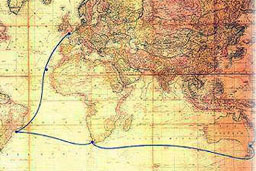 Voyage of the First Fleet

On 13 May 1787 the ships left Portsmouth with the convicts deep below decks and in chains. Bread and water was in short supply on the Lady Penrhyn (home for my ancestor Olivia Gascoigne), on the Charlotte, and on the Prince of Wales. Amongst the many things left behind were clothing for female prisoners, lists of the crimes and sentences, and an introductory letter to the Viceroy of Rio de Janeiro.

The vessel Charlotte was so slow she had to be towed by the Hyaena, a naval escort ship. Two days later Governor Phillip made the humane decision to unchain the convicts enabling them to move about and to wash.

On 18 May Scarborough convicts attempted an uprising but were foiled. My great great great great grandfather, Nathaniel Lucas was a convict on board the Scarborough but it is not known if he was part of the attempted uprising. By this time the weather became rough and some of the ships took on water. Two days later the Hyaena turned back leaving the Charlotte to make its way as best it could.

After two weeks sailing the fleet reached Tenerife on 3 June and remained there for a week. Crew members were allowed to go onshore and the convicts, who had been below deck since leaving England, were allowed on deck. Fresh provisions were taken on board for a total cost of seventy-six pounds, one shilling and ninepence. Unfortunately there was a shortage of vegetables which worried Governor Phillip who feared those under his command might succumb to scurvy. 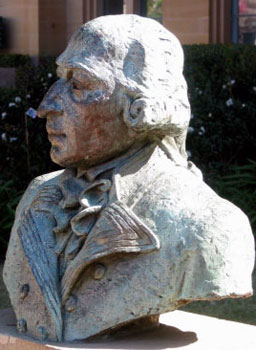 After the fleet left Tenerife it had two months of sailing before reaching the next landfall. On 15 June, to celebrate the crossing of the 'line of Cancer' crew members who had never made the crossing before underwent the ceremony of being ducked. Ceremony is probably the wrong word, this was cruel behaviour whereby the sailors had their heads pushed under water. At this time, due to inattention by sailors, there was a near collision between two of the vessels.

On 25 June comment was made about the cleanliness of the ships and the use of oil of tar as an antiseptic which meant the crew and convicts were healthy. Rations were running low and water was cut to three pints per day per person and, as the fleet was passing through the tropics, this made life very difficult.

Crossing of the Equator

On 14 July the Equator was crossed and once more ceremonies were performed by the crew. Three days later an inspection of the Alexander showed the bilge water had risen to a great height and stank causing sickness amongst the passengers. An order had been made that bilges should be pumped out every day but the master of the Alexander had ignored this to the cost of those who sailed on board.

On 4 August the fleet was close to Cape Frio, at Rio de Janeiro, but winds prevented them from entering the harbour all day which must have been so frustrating after so long at sea. By nightfall the fleet had docked and would remain there for a month while supplies of food and water were taken on board and while repairs were made which were vital as the next step was the voyage to Cape Town.

While crew members took advantage of shore leave, the unfortunate convicts remained in chains below deck for the entire period. Food supplies however were far more enjoyable with the inclusion of bananas, guavas, lettuce, and oranges. Convicts were now said to be far healthier than they had been when they left Portsmouth. Rum was part of the normal supply for soldiers and crew and even wine was provided for convicts.

The fleet left on 4 September and from 5 September convicts were allowed out on the decks for various periods. As Governor Phillip had spent his own money to buy soap for the convicts, they would have been much cleaner than previously. The next part of the voyage, which was to last 39 days, included storms which inflicted damage on several vessels however the condition of the winds also meant the fleet was able to move quickly. An uprising by convicts on the Alexander was quickly quelled.

By the evening of 13 October the fleet was at anchor in Table Bay at the Cape of Good Hope. The Governor, Van de Graaf, was a grumpy oaf who lied about a drought and said there was no grain. Later Governor Phillip met Dutch traders who told him there were bumper crops and no shortages. Following this good supplies of bread, meat and vegetables were quickly obtained. On 12 November the fleet set sail once more, this time compared to Noah's Ark by Governor Phillip as there were more than 500 animals on board.

Sixty-eight days were to pass before the fleet reached Australia and during this time sailing conditions were dreadful with strong winds and storms. The convicts remained below deck, usually wet and having to subsist on food which did not have to be cooked as fuel had run out.

The fleet was divided into three on 19 November, each group to go ahead as best they could under the difficult conditions. The fast Supply was the leader of the pack which included the Alexander, Friendship and Scarborough. Next came Sirius, Lady Penrhyn, Charlotte and Prince of Wales, with the third group made up of the storeships.

A week later Governor Phillip boarded the Supply and by evening it was well ahead of the remaining ships. Very rough weather continued to slow the progress but no ships were lost. Whales were frequently sighted which had an alarming propensity to rise up beside the ships.

Those on board the Supply sighted land on 5 January however the vessel made very slow time due to very rough weather. The remaining vessels had caught up with the Supply which had been unable to enter Botany Bay until 18 January.

The following day the Aexander, Scarborough and Friendship were able to lower their anchors in the harbour. The remaining ships arrived the next day however Botany Bay was deemed unsuitable for settlement by Governor Phillip and the fleet finally dropped their various anchors at Port Jackson on 26 January 1788. My great great great grandmother, Olivia Gascoigne, and her husband-to-be, Nathaniel Lucas had finally arrived in Australia.