Cousins Glenda and Paul send this photograph to me. It shows the area where Olivia (Gascoigne) Lucas farmed land on a grant on the Tamar in Tasmania. Below the photograph is the map of the land grant. 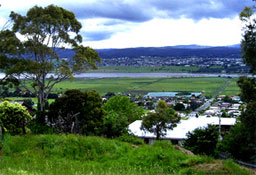 Map of the land grant 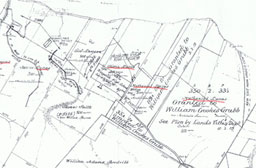 I have, shakily, underlined the name Lucas in red.

Under Sentence of Death

My great great great grandmother, Olivia Gascoigne, was only 24 when she was sentenced to death by hanging. She appeared before the Worcester Court on 5 March 1785 charged with robbery of goods with a total value of 277 shillings. Her sentence was commuted to transportation for seven years.

"Whereas Olive Gascoigne was severally attainted at this assizes of the severe capital felony of stealing the value of above 40 shillings in a dwelling house. His Majesty hath been graciously pleased to extend Royal mercy to her on the condition of her being severally transported beyond the seas for and during the term of 7 years."

More than two years passed before she left England on 13 May 1787 on the Lady Penrhyn, as part of the first fleet. Captain Arthur Phillip was in command of the eleven vessels which included six convict transports, 2 naval vessels, and three store ships. The fleet arrived at Port Jackson, via Santa Cruze, Rio de Janeiro, and the Cape of Good Hope, on 26 January 1788.

Chosen for the First Settlement on Norfolk Island

Two weeks later Olivia was chosen to be part of the first group of pioneers sent off on the Supply to settle Norfolk Island. It is believed she met her husband-to-be, Nathaniel Lucas, onboard. The leader of the party, Lieutenant Philip King, was instructed to choose people who were of good character and who had useful skills. He chose seven free men, six female convicts, and nine male convicts to undertake the first settlement. They left Sydney Cove on the Supply on 14 February 1788 and arrived at Norfolk Island on 6 March 1788. Nathaniel Lucas and Olivia Gascoigne were to spend the following fifteen years there. Numerous marriages took place on the island including that of Olivia and Nathaniel on 5 November 1791.

Three years after their arrival Nathaniel was granted 15 acres at Grenville Valley and, together with Olivia, and their increasingly large family, they farmed and produced wheat, maize, and pork. The Lucas family increased their holdings by buying further land from settlers who returned to Sydney.

Olivia had eleven children while living on Norfolk Island. Her first child, Ann, born on 2 March 1789, was one of the first children to be born there. The very first child born at the new settlement was called Norfolk and was the offspring of Lieutenant Philip Gidley King and convict Ann Inett. A year later twins, Mary and Sarah, were born to Olivia however they died at 18 months of age when a tree, being felled by Nathaniel, descended upon them. Olivia's arm was broken in the same incident.

The Lucas family moved to Sydney where the marriage broke up in 1816 and Olivia, with six of her children, moved to Port Dalrymple in Van Diemen's Land (Tasmania). Nathaniel died in 1818, aged 54 and, during the previous few years several of his sons commuted from Van Diemens Land to Liverpool where they worked with him.

Olivia spent 14 years in Van Diemens Land and from 1824 she lived on 100 acres at Port Dalrymple which she was granted under her own name. She undertook some travel during this time and in 1828 she was recorded as visiting her son, John, at Liverpool in New South Wales.

Olivia was born in 1761 at Severn Stoke, Worcester, England and she died, in Van Diemens Land, aged 69, on 10 June 1830. She was buried in the Cypress Street Cemetery in Launceston. She made a giant leap from facing death at 24, and thereby extinction, to giving birth to 13 children whose descendents today make up the largest family group in Australia.

Links to other Convicts Associated with My Family