Ships which transported Convicts to Australia

I have four ancestors who were convicts who came out on the first and second fleets, and I have therefore become quite interested in the vessels on which they travelled. The voyages invariably lasted five or six months which must have been hell on high and low water for those people immured in the depths of the vessels.

Olivia Gascoigne came to Australia on the Lady Penrhyn 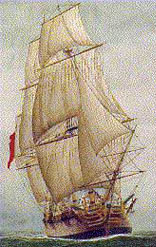 My great great great grandmother, Olivia Gascoigne, was only 24 when she was sentenced to death. Her sentence was commuted to transportation for seven years however a further two years were to pass before she left England on 13 May 1787 on the Lady Penrhyn, as part of the first fleet. If she had been executed I would not be alive today, and nor would many thousands of other people.

Master William Sever skippered the Lady Penrhyn which weighed in at 333 tons. The vessel was only a year old and after the voyage with the First Fleet, it returned to England and was put on the London to Jamaica run. The Lady Penrhyn was captured in 1811 in the West Indies.

And back to the First Fleet where Captain Arthur Phillip was in command of the eleven vessels which included six convict transports, 2 naval vessels, and three store ships. The three store ships were Borderdale, Golden Grove and Fishburn. HMS Sirius and HMS Supply and six convict transports, Alexander, Scarborough, Prince of Wales, Lady Penrhyn, Charlotte, and Friendship which carried a total of 568 male and 191 female convicts, plus 19 officers and 191 marines. The fleet arrived at Port Jackson, via Santa Cruze, Rio de Janeiro, and the Cape of Good Hope, on 26 January 1788. 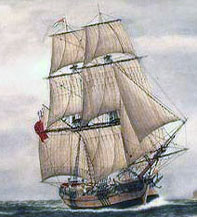 Nathaniel Lucas came to Australia on the Scarborough 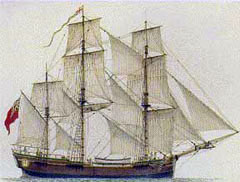 My great great great grandfather, Nathaniel Lucas, was a twenty year old when he was sentenced to transportation for seven years. He was sent to the prison hulk, Ceres, on the Thames for two years and then to the Censor. He finally left Spithead, on the Scarborough, as part of the First Fleet in May 1787.

The Scarborough was built at ! suprise, Scarborough. The large vessel, which weighed in at 430 tons, was five years old when it transported 208 male convicts during the voyage of the First Fleet. The skipper of the vessel was Master Marshall. After returning to England it did a second run carrying convicts as part of the Second Fleet.

The fleet sailed for three weeks before docking at Santa Cruz, Tenerife to take on supplies which included water and vegetables. Two months later, after crossing the Atlantic, the fleet docked in Rio de Janeiro on 6 August 1787. The first fleet remained there for three weeks before sailing to the Cape of Good Hope. On 13 October numerous supplies were taken on board including vegetables and meat. After another break, the fleet left on 12 November 1787 to arrive at Botany Bay between January 18 and 20. The location was considered unsuitable for settlement and so the fleet pushed on to Port Jackson with the arrival date of 26 January 1788. Today that date has two names, Invasion Day, and Australia Day.

Ann White came to Australia on the Neptune 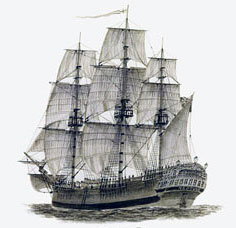 My great great great grandmother, Ann White, was placed on board the Neptune on 11 November 1789 which sailed, from Portsmouth, as part of the Second Fleet, on 19 January 1790. The purpose of the Second Fleet, which was far smaller than the first fleet and had only six ships, was to bring supplies to the the struggling colony which was running out of food. One of the ships contained only stores while another, the Guardian, was wrecked during the voyage. Altogether there were approximately 1580 people on the fleet, (excluding crew members), who included 984 male convicts, 323 female convicts, government officials, and members of the New South Wales Corps plus their wives and children. The number of convicts on board the Neptune is given variously as 514 and 551. The number decreased alarmingly as the voyage was marked by the death of 158 convicts being 147 men and 11 women. After sailing for 84 days the Neptune arrived at the Cape of Good Hope where it took on supplies plus 12 convicts who had survived the wreck of the Guardian. After a voyage lasting 158 days the Second Fleet landed at Port Jackson on 26 June 1790.

Kennedy Murray came to Australia on the Pitt

My great great great grandfather, Kennedy Murray, travelled as one of 404 convicts on board the Pitt which sailed with the Royal Admiral and the Kitty. His date of departure from Yarmouth was 17 July 1791 and he arrived in Sydney almost seven months later on 14 February 1792 when he was about 27 years old. He was one of the lucky convicts who were alive at the end of the voyage as opposed to 29 of them who died.

Ian McAinsh has sent me some interesting information. He says the Pitt was built for and owned by George MacKenzie Macaulay. Ian found a letter from Macaulay which authorises prisoner transportation (the original is held by the National Archives of Scotland).

My son has two more convicts in his line, Martha Brooks and Henry Pollard.

Martha Brooks came out to Australia on the Mary Ann

Martha Brooks was initially sentenced to death however this was commuted to a term of transportation for 14 years. On Christmas day, 1821, she left Portsmouth on board the Mary Ann and arrived, firstly in Van Diemen's Land on 2 May 1822, and thence to Port Jackson where she finally stepped on to dry land on 20 May 1822. She was one of 108 convicts who travelled for 146 days on board the Mary Ann and at the same time 15 other convict transports made the journey delivering convicts to both Hobart and to Sydney. 1822 saw the arrival of 2528 convicts in Australia. Other vessels were Providence, Arab, Mary, Southworth, Isabella, Shipley, Richmond, Phoenix, Guildford, Prince of Orange, Asia, Caledonia, Mangles, Eliza and Amboya.

Henry Pollard came out to Australia on the Somersetshire

Henry Pollard was sentenced to death, however he was reprieved and ordered to be transported for life. He was initially delivered to a convict hulk and in March 1814 he left England forever on board the 450 ton convict transport Somersetshire. He was one of 200 male convicts on board the vessel who would have been delighted, after a voyage lasting 159 days, to arrive at Port Jackson. Altogether seven convict ships made the journey in 1814 which transported a total of 338 female and 919 male convicts. The other ships were the Wanstead, General Hewitt, Catherine, Three Bees, Broxbornebury and the Surrey. Males and females were carried on separate ships.

Many thanks to Ian McAinsh for providing me with fascinating information.

Links to other pages about convicts and Australia