The Streater/Streeter line in Australia can be tracked back to Emory Streater who was born in 1780 in Kent and who married Frances Catherine Gillman (born 1784 at Dover) on 22 September, 1798 at St Mary's at Dover. 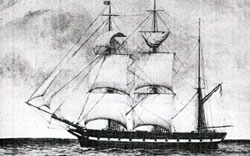 Both Edward and Rebecca's sons left England on board the Lady Milton and arrived in Sydney on 28 July 1862. William had eleven children and Trevor Jordan reports the descendants are now spread all over Queensland from Calliope to Bundaberg.

Now we go back to William Streater and Charlotte Pelham's son, Edward (born 1842) Who married Mary Pollard (1842 to 1921), the daughter of two convicts, Henry Pollard and Martha Brooks who are mentioned in my convict list.

Trevor Jordan has been a wonderful resource and all the following photographs and information have been been contributed by him. 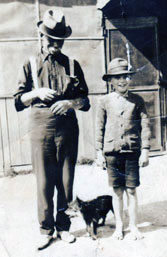 Above is Edward Henry Streeter who is pictured with his grandson, Reuben Charles Jordan (1915 to 1969), and unknown dog. The house was thought to be in Stephens Road, Botany and the photograph was taken during the early 1930's during the depression. 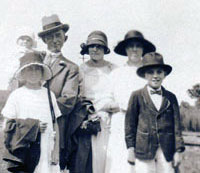 Trevor writes this photograph was taken near the railway tracks behind Kelloggs in Botany. "This is my grandparents (Edward and Easter Streeter), my father (Reuben), and his sister, Florence May (born 1914) and younger brother William Edward (born 1925). In the middle is Grandmother Flo's younger sister, Clarice Olive Myrtle (1893 to 1983). Clarice married Alfred Austin Speechley (known as Ernest). This marriage merged the flower empires of the Streeters in Mascot to the Speechleys in Botany."

Trevor's grandparents and Easter Ellen, his mother, Bessie (nee Swan), and the young Billy Jordan. Grandfather is at the back. 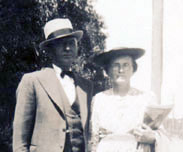 Trevor's grandparents, Reuben Charles and Florence May. Reuben could play the guitar and banjo and had a beautiful singing voice. 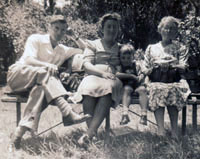 Trevor writes the photo was taken around 1948/1949. Florence May, his mother, his brother Peter, and Billy. Soon after this Billy married and died. 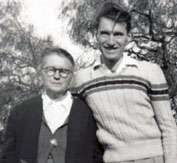 Florence May with Trevor Jordan on the left and his cousin, Lea, who was born after her father, Billy, died. 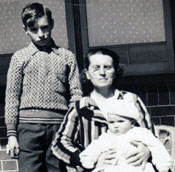 A young Billy, Florence May and Trevor believes one of his cousins, either Kevin or Lyle Wright.

Very many thanks indeed to Trevor Jordan for sharing this information.