The Mann Family History
From Herefordshire, England to Lexton, Victoria 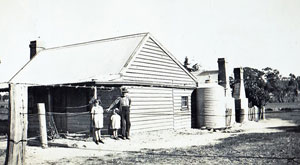 Many of my ancestors have lived in Creswick, near Lexton, and as a result, on the suggestion of Noel Robertson, I have happily joined Creswick Connections on Facebook. A wonderful page. It was begun by Malcolm Williams who has dedicated the site to Joan Lavinia Jones (nee Mann). Joan, who died in 1987, carried out a lot of early research into the Mann family, long before the days of the internet. 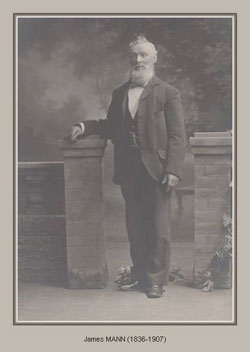 Julia and Charles Porter
With many thanks to Dorothy (Porter) Robertson

Julia Porter, who was born Elizabeth Julia Mann, was the daughter of James Mann (from Ullingswick, Herefordshire) and Eliza Miller (from Adelaide). James, and my great grandfather, Charles, were brothers.

The story of the Mann family and their arrival in Australia

The first of our Mann family to arrive in Australia was my great great grandfather James Mellin Mann (1811-1892) who was born in Moreton Jeffrey in Herefordshire in England. On 25 May 1833, James married Elizabeth Wilson (1814-1866) at St John the Baptist in Worcester, Worcestershire.

My great grandfather, Charles Mann, was born in Bromyard, Herefordshire England and was christened on 4 September 1848 at Ullingswick in Herefordshire. Charles, who was only 11 when he emigrated to Australia, lived in Victoria for 70 years altogether and spent 33 of those years in Lexton. He was married, on 26 December 1861 at Maryborough in Victoria, to Ellen Lyons, the daughter of Michael Lyons and Sarah Jane Marks.

My great grandmother, Ellen Mann nee Lyons is on the far right.

The Ballarat Courier ran obituaries on both Charles and Isabella (known as Chatty Mann). They lived in Lexton, next door to Charlie's father and mother and although both my grandparents died before I was born, I do have vague memories of visiting the remains of their old home, which had been left to my father. 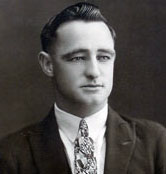 My father, Thomas, married my mother, Merlyn Isobel Dudley on 8 April 1939 at Brunswick in Victoria. I understand they met on a train on their way to Euroa where these two teetotallers were going to pick hops.

The photographs below are from Russell Giacometti and are of his great grandparents, Emily Chellew and Massimino Giacometti. They are also the parents of the man I knew, very well, as Uncle Vic (William Victor Giacometti 1895-1967) who was married to my father's sister, Eva Caroline Mann.

For many years Uncle Vic came to my parent's house at Flowers Street, South Caulfield, (just a few blocks away from Vic's home in Fallon Street), twice every week to play euchre and five hundred with my parents, Tom and Merl Mann, and with Merl's brother, Lester Dudley. From the age of about five I was shanghaied into playing while my mother made supper.

The wedding of Dad's niece, Thelma Giacometti, to George Brown.
The flowergirl was extremely well behaved.

Many thanks to Russell Giacometti for the photograph (above) taken on the day Dad's niece, Thelma (also known as May), married George Brown.