The Hovey Family
From Milton by Gravesend to Lexton, Victoria

My first Hovey relation to arrive in Australia was my great grandfather, James, who was born on 16 November 1828 in Milton by Gravesend, Kent, England. He was the son of John William Hovey who was born on 14 August 1789 at Shorne, Kent, England, and of Elizabeth Mary Parsons. John and Elizabeth were married on 17 August 1818 at Southwark, St George the Martyr, at Surrey, England.

James, who was a woodcutter, married my great grandmother, Caroline Lucas, on 10 July 1857 at Maldon in Victoria. Caroline who was born on 31 August 1840 in Van Diemen's Land, was the daughter of James Lucas (1798-1869) and Elizabeth Murray (born in 1802 and died in 1878). James was the son of two convicts from the First Fleet, Nathaniel Lucas and Olivia Gascoigne. Elizabeth was also the daughter of two convicts, Kennedy Murray and Ann White.

Isabella was born on 29 May 1869 in Creswick, Victoria and died on 12 October 1932 at Lexton, Victoria. She was a midwife who was well-known around the district and her obituary in the Ballarat Courier of 17 October 1932 described her funeral as being very large and said she was greatly respected throughout the district.

She married Charles Mann in Ballarat on 5 August 1888 and they had ten children of whom the youngest, Thomas, was my father. The family lived at Lexton for many years and Isabella was fondly (I hope) known as Chatty Mann because she talked so much. The photograph below was taken in 2015 by Dale and Heather Mann and shows the site in Lexton where the Mann family lived. 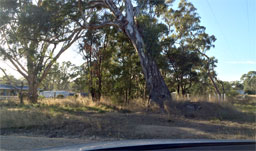