A Beautiful Place to Live
and hardly touched by Covid-19

Mackay, which is midway along the Queensland coast, boasts 31 broad and beautiful beaches, lush farming areas, and tropical rainforests. Many of the suburbs, which are a mix of original Queenslanders and new housing subdivisions, include beach front areas. Mackay is dotted with many green areas, parks, gardens, and farms. We even have grazing cattle in the heart of Mackay thanks to the agricultural program at Mackay State High School.

Initially the worldwide financial chaos had little effect on Mackay which was high on the top ten list of Australian regional growth areas. The economy, based on mining, sugar, cattle, and tourism remained sound for a long time.

Unfortunately the downturn of coal prices has meant many mines have either shut or laid off many workers. In a 12 month period approximately 10,000 people lost their jobs with the mines. The introduction of Fly In Fly Out means numerous mines no longer accept applications of employment from people living in Mackay. The only addresses considered are Brisbane, Rockhampton, Townsville, and Cairns. The downturn in mining has been reflected in the closure of many service industries and loss of yet more jobs. For a time the construction industry remained in high gear, and the facade of the area constantly changed but during 2014 and 2015, many builders left the area and construction firms downsized.

Rents, which had been at a ridiculous level, have now plummeted and those who saw negative gearing as a way to make wealth have now had to change their plans. Rents of commercial properties are now very low and it is sad to walk around Mackay and see countless empty shops, and offices.

Finding a flat or house to rent in Mackay is very very very difficult. Do not come here unless you have pre-arranged accommodation. The cost of renting has also soared. Not sure if this is because of Covid where Mackay has been seen as a safe place to come and live. Unfortunately Covid is now rife right throughout this state.

Although Mackay is more than 1000 kilometres from Brisbane, it is far from being a cultural wasteland. The Mackay Entertainment and Conference Centre hosts numerous performances by state, intra-state and overseas performers. Regular performances are also provided by Kucom, at a variety of venues, and by the Mackay Musical Comedy Players.

New displays are on show every few weeks at the Mackay Art Space. The area includes a restaurant which is a popular meeting place. Some people consider the twirly bit on the outside of Artspace very like the end result of opening a can of sardines, and then leaving the tin in the rain.

Mackay is very well served with one mobile library and four stationary libraries at North Mackay, Walkerston, Sarina and Mirani. (I ignore the building in the City Heart). The mobile library provides a regular service for people who are unable to travel. Librarians at all the libraries are extremely helpful and pleasant people and it has been my pleasure to know them for many years.

Unfortunately the previous Mackay Regional Council made a very sad decision, to move the Mackay Library, which had been located in the council hub in a garden setting, to the city wastelands, no consultation whatsoever. I engaged in a mission to change this decision and have suffered umbrage that now MRC provided five consultations for the new library while denying readers any input whatsoever into the removal plan. The new Mackay Regional Council was faced with a fait acompli when it came on board in early 2016. As the preceding council left the building it accepted a tender for the new library in the city. Most of the old council were turfed out. Jolly good, they were mostly bastards with a few exceptions. As Roy from the IT Crowd was wont to say - "People, what a bunch of bastards."

The Central Queensland University includes an excellent library, conservatorium, and numerous lecture theatres. Following a partnership between the university and TAFE, many changes have been made to the campus. The university setting is unique, it is, in typical Mackay style, partly surrounded by canefields. Unfortunately a new housing development suddenly sprang up on one side of the university which partially wrecks the ambience.

Mackay State High School is the oldest high school in Mackay but has very new airconditioning, paintwork, and fencing. This school also has an agricultural program and cattle, on their huge grassy tree-ed lots, are an interesting sight in the centre of Mackay. The Mackay area has the full panopoly of primary and high schools, both state run and private.

Canefields are a common sight right throughout Mackay. New housing estates are edged or even ringed with cane. On the edge of the city is the Racecourse Mill.

There are many lovely old buildings to visit in Mackay. The area was settled in 1862, although many places already bore names following the sail-by made by Captain James Cook in 1770. 1865 was a good year, the first sugar cane was planted, the town of Mackay was laid out, and the customs house, which still stands today, was built. 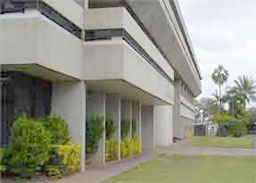 Whether you are coming here to live, or just visiting, you couldn't chose a more beautiful place. Mackay has great weather with a mean maximum temperature of 26 degrees and a mean minimum of 17 degrees. There are two seasons, the wet (summer months) and the dry (winter months). With Australia's changing climatic conditions, Mackay's weather pattern has become somewhat erratic but the region is lucky to receive excellent rainfall and is usually very green and lush.

Feedback - I look forward to receiving all kinds of feedback about my site.
Please contact me here.