I have lived across the road from Mackay State High School for the past twenty-five years and, in addition to this proximity, I have close connections to the school through my three children who were all students there, as well as my daughter-in-law, and a variety of grandchildren.

I find it hard to believe it was nine years ago when Mackay State High School celebrated its centenary in 2012 with a week of activities which included a centenary ball which was held at the Mackay Entertainment and Convention Centre and an open day. Other events included the burial of a time capsule and a meet and greet school walk. A sporting event, between past and present students, was also held. Where did those years go?

The principal, Steve Paulger, says, on the MSHS website, that the school, which opened on 1 January 1912, in what is now part of the TAFE complex, was one of the first state high schools opened in Queensland. The school moved to its present site, which has a frontage to the Milton Street cul de sac, in 1963. The school has 1183 students.

Many congratulations to the cattle show team from Mackay State High School who scored excellent results at the shows held in Mackay, Pioneer Valley, and Proserpine. Among the awards was first prize for Herdsman Award, Senior Champion, and Reserve Champion Cow, and Reserve Champion Heifer.

It is amazing to live in the heart of Mackay and still be able to see cattle down the next block. I have never forgotten visiting the Freemantle Show decades ago and seeing my first Aberdeen Angus bull. 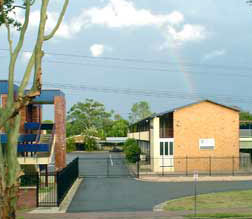 In addition to the expected subjects which cater for students who are academically inclined, and also for those who plan to follow a particular vocation, Mackay State High School also has a strong music program and an agricultural program.

The Mackay flood in February 2008 sent about three feet of water raging through the school and in the process part of the front brick fence was demolished.

The school has a large oval which is also used outside school hours by community based groups and by individuals who run around like mad dogs and Englishmen. 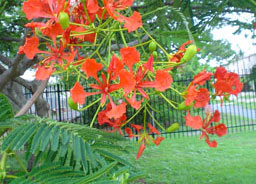 The tree provides shade for students waiting each morning for the buses which go on to Victoria Park State School, and to other schools in the district.

The school has a new purpose built computer building (which I manage not to see as a number of beautiful old trees were murdered in order for the ground to be cleared). 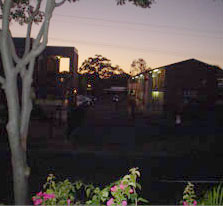 Feedback - I would love to hear from any former students.
Please contact me here.