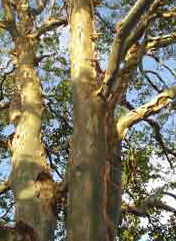 This tree grows just outside my fence and several times a year I undergo frustration because I am not able to climb up and neaten all the dangling bits of bark. It gives me great joy when I sit on my deck and helps to shade my secret garden. The Tree Grows in Brooklyn is a novel, written by Betty Smith and published in 1943. It must have been republished in the early 1960's when I borrowed it from the library at The Age. I loved the book then but am not game to reread it in case I am disappointed. 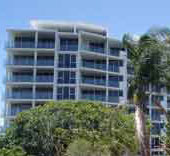 From the beautiful tree I move to the awful apartment buildings on the banks of the Pioneer River, fronting River Street, in Mackay. Buildings like these destroy the whole ambience of the river. No doubt many people are delighted to live in the concrete prisons like those above.

A relatively new boardwalk along the Pioneer River provides a great place to spend an hour or two, as long as one keeps one's eyes firmly on the river views. The new Blue Lagoon is a focal point for families, just a pity it is overlooked by the monstrosities. 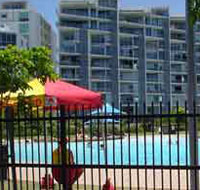 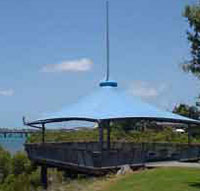 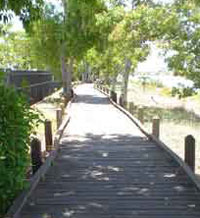 Louise (facilitator), and Val at the seniors' consultation

The conference room at South's Rugby League Club was packed with representatives from a wide array of organisations and with interested members of the community for the Positively Ageless consultation forum. The consultation, which was opened by Karen Struthers, Minister for Community Services and Housing and Minister for Women, was organised by the local Department of Communities.

A wide variety of issues were brought up at the various discussion tables involving health, housing and transport. The elderly in Mackay are in the invidious position of having to drive more than 400 kilometres to Townsville to access specialist advice and for operations which cannot be performed in Mackay.

Link nurses from Sarina Aged Care Residential Home, Resthaven on Quarry, Homefield Aged Person's Home and Good Shepherd Lodge gathered at Sorbello's Restaurant to celebrate the end of an interesting year of education events. The link nurses, who are organised by the Rural Palliative Care Project run by the Mackay Division of General Practice, will continue to receive education next year.

When it's a frog! 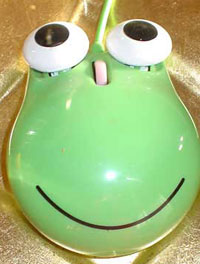 My new mouse is operating well, in fact it is frogtastic. My house is full of frogs and I plan to add a Frog of the Day/Week page to this site within the next few weeks which will probably totally delight everyone.

A different type of house

Here is a clear indication that little boys grow up to be big boys. The photograph above shows early construction of a house for humans made of Lego. More than 1200 volunteers worked on the building and used 3.3 million plastic bricks. A further 1500 people who wanted to play were turned away. Sadly, after the house was completed it had to be torn down however all the Lego was donated to charity. Tragic note, a Lego cat, called Fusker, who was on site, was stolen. One hopes it has gone to a good home. The house was built on a wine estate in Dorking, UK. No comment. 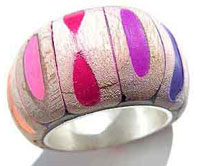 The unusual item, above, is a silver ring which is embellished with fragments of coloured pencils. The ring is one of many pieces of jewellery which have been designed by Maria Cristina Bellucci who began her working life as a maker of theatre costumes, accessories and jewellery used in performances. Her early work was made from thin metal sheets and wires but she has now moved onto solid pieces which are very colourful. Ms Bellucci was born in 1964 in Italy and has worked and lived in Rome since 1988. Exhibitions of her work have been presented in Italy, Germany, Portugal, USA, Switzerland and Slovenia. 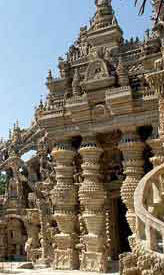 When I recently completed my university degree as Bachelor of Multimedia Studies, I thought, having so much more time, that I would be able to update this site every few days. That hasn't happened but I have had the time to do a lot of searching online on many different subjects which interest me, health matters, architecture, literature and film, and one of the interesting architectural oddities I found is pictured above.

The fascinating building was begun more than a hundred years ago as the result of a postman tripping over a stone! Ferdinand Cheval began marking stones when he covered his postal walk and every evening he returned with a wheelbarrow to collect them and to build, very slowly, Le Palais Ideal which is at Hauterives in France. Numerous architectural ideas including gargoyles, mosque motifs and Hindu temples were included.

Joh enjoys the view on the waterfront at the Mackay Marina

This is what the area, on the land side of the marina, looked like, when I took photographs there on 5 September 2006.

Below, this is the carnage I photographed at the weekend.

Dean and his father, Charlie

Many congratulations to Charlie Dudley who has celebrated his 95th birthday surrounded by his wife, children, and their families, and Charlie's siblings. Many thanks to Charlie's granddaughter, Jen Dudley-Nicholson, who has taken all these photographs most of which will expand if you run your mouse over them.

Jen, who made the decision to be a journalist when she was nine, is The Courier Mail technology editor. She studied for her Bachelor of Journalism at the Queensland University of Technology and has won a Country Press Award for Feature Writing. She has been a finalist in the MEAA Queensand Media Awards three times.

Below left is Charlie and Doreen with her siblings. To the right is Charlie with his sister, Betty. 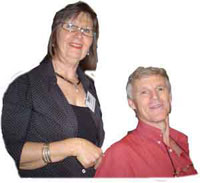 The photograph above shows MDGP's Ros Laspa, who runs the Mackay Rural Palliative Care project, with Dr Will Cairns, our guest speaker, who attracted a full house of gps, nurses and allied health professionals for his recent presentation.

Dr Cairns is the director of the newly established Palliative Care Centre which has been built on the grounds of the Townsville Hospital. The $8 million centre provides 20 palliative care beds and is staffed by people who specialise in providing palliative care.

Quoted in a recent story in the Townsville Bulletin, Dr Cairns said the building was a tribute to the Cancer Council of Queensland and to the local community which showed Townsville's compassion when it came to death and dying.

Mary Anne is the first to arrive!

In a sad reflection on health workers, who should be in the forefront of advising patients about the need for powers of attorney, wills, and advance health directives, a show of hands of members of the audience proved very few of the attendees had arranged for any of these for themselves. If the professionals don't set the example, how are they to educate their patients?

Below Angela, Ros and Melanie set out resources for the education evening.

Many years ago, in Darwin, I wrote a story about a local architect, who had designed, and lived in, a very similar house to those pictured above. Dutch architect Dries Kreijkamp, whose flights of fancy led to the houses pictured above, called bolwoningen, is also a lecturer in sculpture and design. In addition to houses he has designed clothes and images and when he worked at the Dutch Royal Glass Factory, his crystal spheres were considered remarkable. 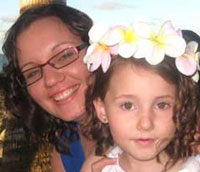 Mary Landesman, who puts out a regular blog, says Facebook users need to be aware there is a bogus e-mail, which claims to be from the Facebook Team, which says the user's password needs to be changed. The e-mail says the attachment contains the new password but it actually contains a malicious trojan. This site, Mary's Antivirus Software Blog, is very useful and helps to keep people up-to-date with what is happening on the internet. Subscribe for weekly e-mails so you can protect yourself.

Above, representing Mackay residential aged care facilities at the pain workshop, are Mary Anne from Resthaven on Quarry, Sister Pauline from Francis of Assisi Home, and Suzy from Sarina Aged Care Residential Home.

The TAFE theatrette was once again the venue for an event run by Ros and the Mackay Rural Palliative Care Project. Mundipharma provided the speaker and resources for the Pain Workshop for Nurses. The evening was very well attended by a range of nurses representing residential aged care facilities, community organisations, and GP's practices.

The photographs above show Mundipharma speaker, Chris, with project officer, Ros, and some of the audience. This event is the second last educational night this year for Mackay link nurses who are being provided with additional training through the palliative project. 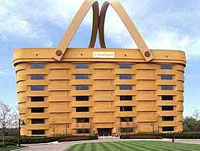 Willow is now ten years old but he remains a vigilant yet gentle dog. I miss him a great deal.

Down among the fishes

I am no longer enchanted by the Weekend Australian, indeed I am frequently discombobulated. The magazine section has a new clean layout, unfortunately the content is lacking. If I wanted to read about stuff like fashion, food and/or wine, I would buy magazines which target those areas. I continue to enjoy the book reviews and discovered in a review by Peter Kirkwood of Jim Eames book, Six Feet Under or Up In Smoke: The Aussie Way of Death, that if you wish, you can have your body buried at sea, however you will need 52 kg of ballast to make sure you remain down down down beneath the waves. Such burials are governed by the Environment Protection Act 1981.

My children and their families 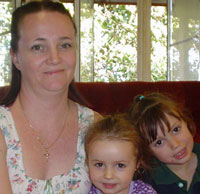 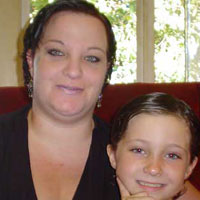 Below is a photograph of the Mackay Rural Palliative Care Project advisory committee following our recent meeting. We are very lucky at Mackay Division of General Practice to have such a passionate and competent group which is complemented by our working committee. The committees include residential aged care facility dons, domiciliary nurses, consumers, an oncologist, GPs, a psychologist, and Queensland Health.

I have had a delightful couple of days reading a book by Norman Doidge called The Brain That Changes Itself. The book includes numerous case studies which show people, who were in a compromised mental state, improved radically following a variety of exercises both mental and physical. The book also discusses the importance of continuing to learn and enjoy new skills as one grows older. I loved a quote, attributed to Pablo Casals, who, when asked at the age of 91 why he continued to practice, replied, "Because I am making progress". 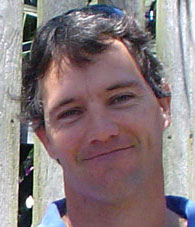 And now it is my son's birthday - hope you had a very happy day.

A number of interested people gathered this afternoon at the public forum, "You don't have to have cancer to be palliative" at TAFE. Chaired by Brian O'Neill, the forum was organised by Ros of the Rural Palliative Care Project which is part of the Mackay Division of General Practice.

The strong panel included local people involved in all facets of palliative care.

Below left is Brian and to the right is a photograph of Carmel, Ros and Liz, who, as a zone co-ordinator for the Rural Palliative Care Project looks after 12 projects in Queensland, New South Wales, Victoria and Tasmania. 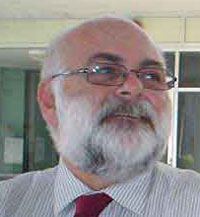 Above, a happy face at work - and Ros and Nicole provide a lovely lunch

Below, be careful online

The WindowsSecrets reveals a worrying trend where some of the sponsored advertisements on Bing and Google will dump malware on your computer if you click on them. To be safe it is a good idea to install the free program McAfee SiteAdvisor on your machine. This works on Firefox and IE and will be green if the site is safe. Even then sometimes SiteAdvisor is out of date so if you suspect a site may be unsafe, do not click.

I use a cut down version of Google which does not contain advertisements. You can find scroogle at www.scroogle.org/scraper.html.

Also be very wary indeed if a pop-up advises you you have a virus on your machine. These sites are malware and are very difficult to remove.